MARITIME SURVEILLANCE IN THE MEDITERRANEAN - STRATEGIES, POLICIES AND PROJECTS 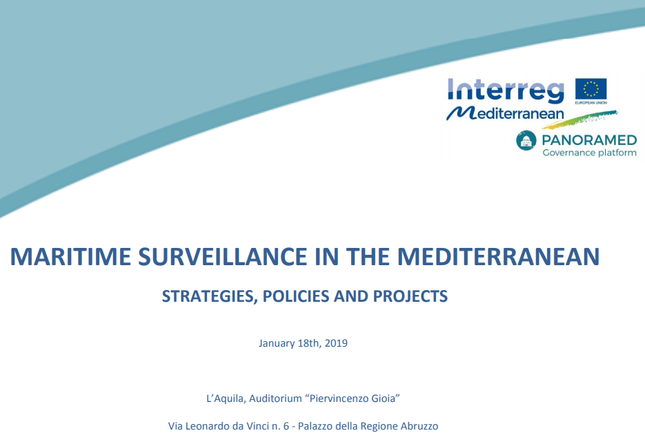 The workshop is organised in the framework of the PANORAMED project activities carried out in italy.

The PANORAMED High-level Conference will take place on Friday, January 18th, 2019 in L’Aquila, Italy. The event is organised by Abruzzo Region and Marche Region (Country Coordinator for Italy of the PANORAMED Project).

The event focuses to animate a debate on governance and maritime surveillance in the Mediterranean, and is the first to be held in Italy on such a strategic topic for the European Union. It intends to be an opportunity for discussion and technical analysis of the actions to implement at local, regional, national level, in order to improve maritime surveillance in the Mediterranean region as a whole.

The Conference is organised in two sessions:

Second session: Two round tables, the first examines the impact of governance on maritime surveillance in the European cohesion policy, while the second analyses PANORAMED Strategic Projects Topics, in order to identify all relevant stakeholders.