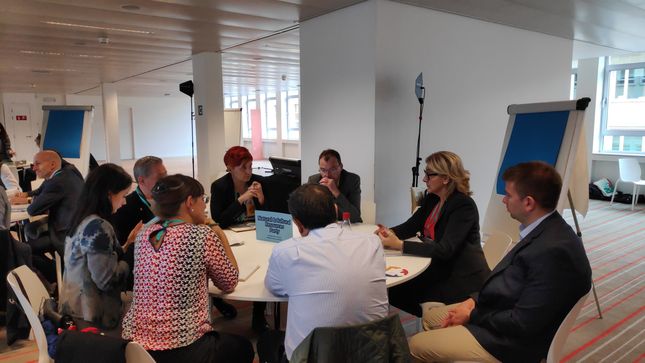 On Wednesday 9 October, PANORAMED was present at the Interreg MED Piazza organised in the framework of the European Week of Cities and Regions (EWCR) in Brussels.

Caterina Brancaleoni from Emilia-Romagna Region represented PANORAMED in the Civic Parliament corner, moderating the work of the natural and cultural resources group. Representatives of MED communities, municipalities and regional authorities spread around the Mediterranean area deliberated about the actions to prioritise to meet the challenge of sustainable development in the Mediterranean.

The importance of culture was underlined as one of the pillars of the Mediterranean identity and a unifying element on which to leverage to strengthen the necessary cooperation for the transition towards sustainability. Better multilevel and inclusive governance emerged as crucial factor to overcome the tendency toward fragmentation and division in the Mediterranean, building on common legacy.

Many obstacles PANORAMED deals with – finding common language and understanding, dealing with objective diversity in the area, finding compromises among conflicting interests and points of view – came out during the discussion.

Useful inspiration for the next PANORAMED activities came also from the other two groups (Innovation and Low carbon economy) confirming the importance of capitalising the inputs and results coming from different fields.

Closing the session, Mercedes Bresso, former member of the European Parliament and former President of the Committee of the Regions, congratulated the participants for the quality of the proposals and encouraged them to stay engaged in cooperation for the future of the Mediterranean.