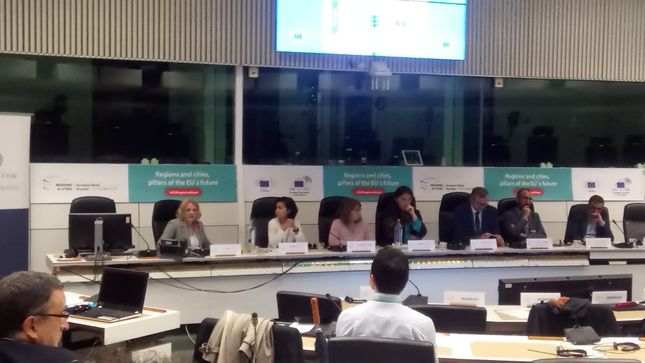 On 8 October 2019, PANORAMED organised a Participatory Lab in the framework of the European Week of Regions and Cities. This event took place at the headquarters of the European Committee of Regions, in Brussels (Belgium).

Eleni Hatziyianni (PANORAMED Liaising leader) welcomed the participants and indicated that PANORAMED is the only transnational project focused on governance in themes such as maritime surveillance, coastal tourism, or innovation. She celebrated the production of important policy papers which led to the creation of terms of reference for a call for Strategic Projects.

Subsequently, preliminary remarks and ideas were put on the table by Christos Economou (DG MARE) and Valerie Dumondet (Arco Latino). They talked about the importance of projects such as PANORAMED in promoting development in the Mediterranean basin with respect to its diversity.

Then, a political session followed. Moderated by Eleni Marianou (CPMR), it counted on the participation of representatives of regions in Greece, Spain, Italy, Portugal and France. Stavros Arnaoutakis (Crete) asserted that the Mediterranean region constitutes an area of great strategic importance for Europe and great potential, and called on the participants to work together to facilitate its development. Elías Bendodo Benasayag (Andalusia) stated that PANORAMED is a unique opportunity for policymaking in both shores of the Mediterranean, so local and regional bodies should take full responsibility and work together to forge the path for sustainable development in the area. Agnes Rampal (Sud Provence-Alpes-Côte d’Azur), stressed the importance of the funds dedicated to neighborhood policy as facilitators of economic development and social cohesion in both shores of the Mediterranean Sea. Antonio Ramos (Algarve) referred to PANORAMED as a great opportunity to facilitate improvement of policymaking and eventually governance as the project offers a space for capacity building.

Finally, six PANORAMED project partners were in charge of the technical session. Moderated by Lydwine Lafontaine (Interreg MED Joint Secretary), they stressed the importance of creating synergies between projects implemented within the Interreg MED Programme. They presented PANORAMED as a  laboratory for policy proposals for the next programming period. Additionally, they mentioned that the mainstreaming activity foreseen within PANORAMED plays a crucial role in finding complementarities between policies, programmes and initiatives being implemented for better policies concerning coastal tourism, maritime surveillance, innovation and migration.